The exhibition tracks those contemporary forms of the moving image which consciously make contact with experimental approaches to filmmaking throughout the history of cinema. As a direct outcome of technological processes, the image constitutes a theme for its own contemplation – both on the level of an artwork’s creation and presentation, as well as in the specific steps taken during its remediation and archiving.

Through their concerted work, as well as for reasons of their further (theoretical, curatorial, or pedagogical) efforts, the exhibited authors represent a meticulously crafted and up-to-date understanding of the contemporary moving image. Furthermore, by directly referring to and drawing inspiration from the domain of formal and structural film, they disclose the mechanisms and processes that are usually hidden in a closed circuit between input and output. The relationship between technical means and image thus gets de facto inversed: the recording technology doesn’t as much serve the image; it is the image that gets to be presented as an outcome of certain technological processes when it refers to them by its specific shape.

Based on this set of constellations, BLACK BOX, WHITE HAT examines the moving image’s contemporary situation. It repeatedly draws attention to the pressing question of a ubiquitous modus operandi of today’s digital archival and distribution processes. These have gained a normative mandate. The many allusions to the limits of such processes constitute one of the main thrusts of the event, and the presented works would otherwise linger on the margins of visibility, their existence precarious. Parallel to that – and not only for reasons of the singular theme which addresses the actual end of meaning of recording media within the creative field – the exhibition thematizes the incessant oscillation of existence among various modes of data compression, and the unindexable, performative dimension of the moving image, as well as the role it plays in media and informational literacy and its relation to open source systems and the creative strategies these platforms allow.

The French prologue consciously reproduces the peculiar academic/artistic fetish of the relational problematic of train and film or of the ethos relating to the origins of cinematography. However, it simultaneously constitutes a firm reference point from which to address and ponder the contemporary state of the moving image.

The publication accompanying BLACK BOX, WHITE HAT exhibition is available in the gallery. 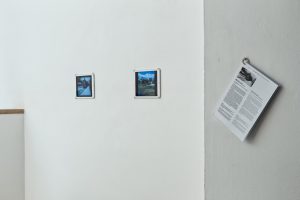 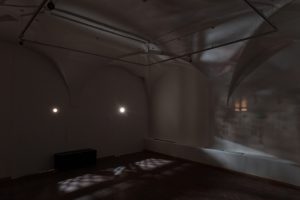